I've been giving a lot of thought recently to balance, namely finding balance between all aspects of life: day job, writing, family, and the various other people and activities I enjoy. When things are balanced, I feel better and, I think, I'm actually more productive across the board.

In looking for pictures that represent balance, I came across the art and idea of rock balancing. If you follow the link, you'll find pictures of amazing rock sculptures that seem to defy gravity. there's even a rock bridge over a small stream. I can't imagine how long it took this person to put these together.

Then I came across inukshuk, or rock art that resembles humans. These figures seem like a great way to communicate with people, to let them know they are on the right path, or that there's a cache of food nearby for weary travelers. I think of the road trips I've taken where I haven't seen a building or another person for a long time, and then finally come across a sign saying the next rest stop or town is coming up, and it's such a relief to know I haven't accidentally wandered off the face of the Earth.

After looking at some rock balancing art, I was inspired to create my own. Living in the Southwest where xeriscape is the norm, I had plenty of rocks to choose from. To my surprise, I stacked seven rocks rather easily, feeling how each needed to balance in order to sit on top of one another. I felt pretty smug about it. I went inside to get my camera, and when I came back out, my dog went to my sculpture and licked it, knocking it down. He licks everything. Everything. Anyhow, it was much more difficult to stack rocks the second time around, so I ended up with only five.

There were a couple of things I learned balancing rocks. First, it's fun. When I stacked seven, I felt like I accomplished something. And it looked pretty. When I stacked them the second time, I realized it can be hard to find the right balance. There's a lot of trial and error involved sometimes. The same is true for other activities. You have to reassess your goals and desires and see if you're meeting them on a daily, weekly, or monthly basis. And third, flexibility is key. If one approach doesn't work, try another. And another. And even another.
Posted by Rebecca at 6:48 AM No comments:

My Experience with The Odyssey Writing Workshop

The Odyssey Writing Workshop is already taking applications for this year's workshop. They have a fantastic lineup of instructors, including Elizabeth Hand, who was an instructor my year, the lovely Catherynne M. Valente, Ellen Kushner, Delia Sherman, Alexander Jablokov, and Gordon Van Gelder.

I went to Odyssey in 2007, shortly after I started writing and submitting seriously. At the time, I was struggling to improve my craft. I had submitted stories to a couple of different editing services, and the feedback was great, but I wanted--and needed--something more. I needed somebody to look at all of my work and tell me my strengths and weaknesses.

Odyssey is run by Jeanne Cavelos, an editor, scientist, and teacher (I swear, she has a time machine stashed somewhere in order to have achieved so much). She's passionate about writing and teaching, which makes for a wonderful experience. She cares deeply about each and every student's progress. She not only pointed out my strengths and weaknesses, but she gave suggestions for improvement. I still pull out the class assignments from time to time and work on them.

I also lived and worked with fifteen other writers at the workshop. They've been invaluable not only for their friendship, but for their help, suggestions, and in networking with other writers and with editors. They are a brilliant bunch, and I've enjoyed watching their progress and cheering them on over the years.

Odyssey lasts for six weeks. The instruction is intense. There's little time for anything else, as you immerse yourself in writing. By the end, my brain felt like a wrung-out towel. I've used the term "life changing experience" in reference to Odyssey. It's so hard to explain, but it truly is. I had the chance to spend six weeks doing something completely and utterly for myself, to push myself, to push my craft, to make friends, to learn, to be amazed. If you'll allow me to sound a bit pretentious for a moment, it was a completely transformative time for my art.

Since I went to Odyssey, I've written countless short stories, a novella, and three novels. I've published ten short stories (with several forthcoming), one novel, one short story collection, and a non-fiction article. Without Odyssey and Jeanne, I would have struggled for a long time, trying to figure out the craft of writing. Worse, I might have given up writing altogether. For those considering a workshop, Odyssey will provide you with an amazing experience.

Posted by Rebecca at 6:27 AM No comments:

To Infinity… And Beyond!

During my recent trip to L.A., the family and I went to the Science Center to see the space shuttle Endeavor. I remember watching launches as a kid, and the thrill of thinking that men and women were actually going into space. I dreamed of being an astronaut, so I was excited to see the shuttle up close and in person. I do, however, think that Houston, of all places, should have gotten one of the shuttles.

The line to see the shuttle was long. There was a wait in one area, then a walk and a wait through another area that showed a shuttle potty (there are an awful lot of straps involved), a display about eating in space, a mock-up of the control center, a timeline of Endeavor's missions, and a video of bringing the shuttle to the building that now houses it (talk about a wide load). And then, finally, we entered a large, corrugated building, and BOOM! Her nose was right there.

Endeavor looks like it's been through a lot of flights. A lot. She reminded me of an old car with a couple hundred thousand miles on it. But despite all the abuse, she's still a beautiful ship. Outdate for sure, but beautiful. 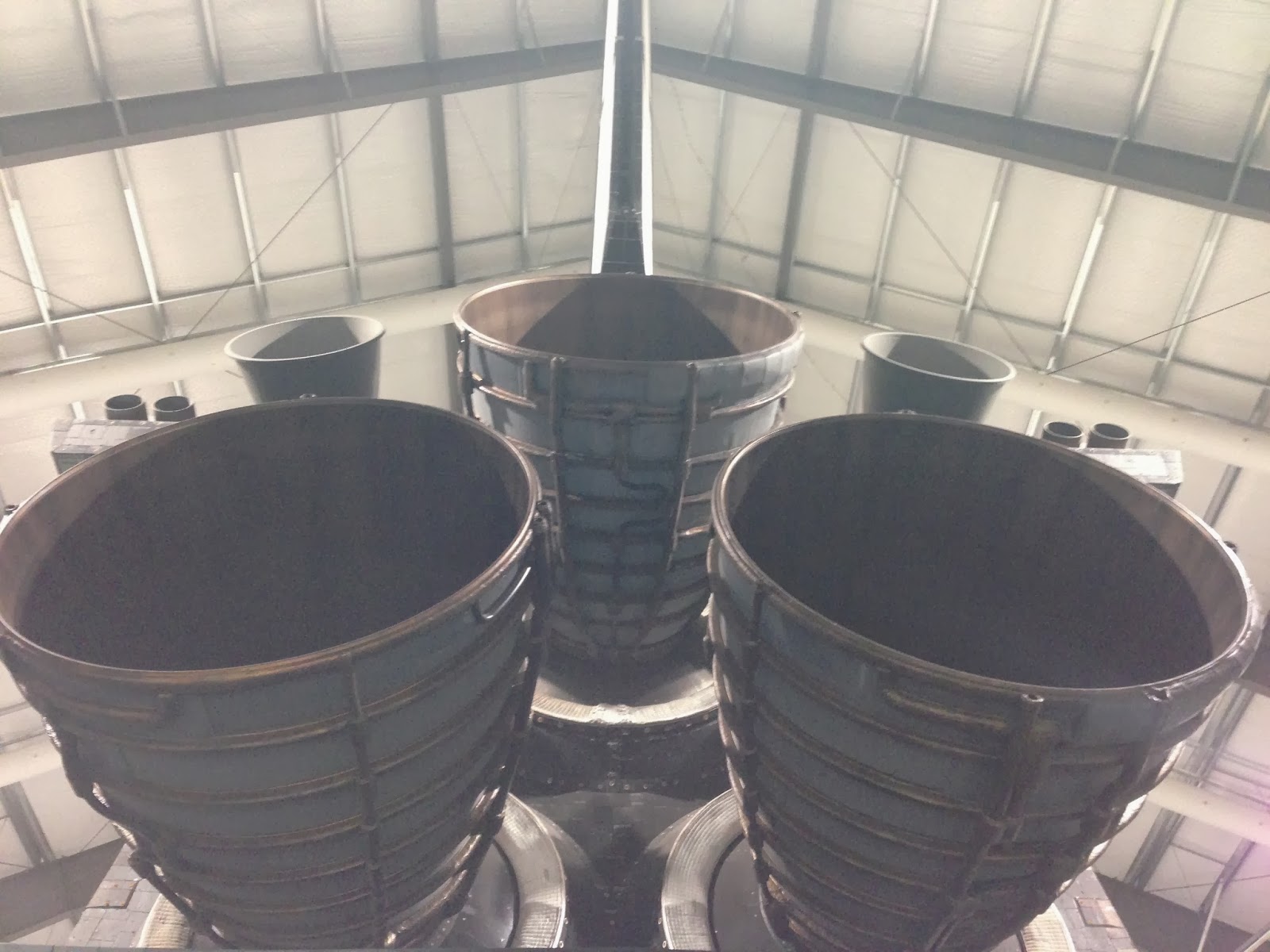 People took pictures. Lots and lots of picture. I did too, experimenting with different angles. I walked
under the shuttle. I wanted to reach out and touch her, and so did other people. A really tall guy stretched up on his toes, fingers reaching, and he came short. I suppose they can't have grubby fingerprints all over it. A timeline of all the shuttles' missions filled one wall and the better part of another. One of the engines was on display. That one engine was bigger than my car.

I felt quite a bit of nostalgia while walking around that hangar. I was sad when I heard the shuttles were retiring, not because they shouldn't have been (they're old, and they should be retired), but because NASA didn't have a ship ready to take the shuttles' place (thought they're working on it now). I don't think most people realize how much of what we use has come from their experiments, like memory foam, solar energy, and LED's. (My back thanks you for a good night's sleep, NASA.) 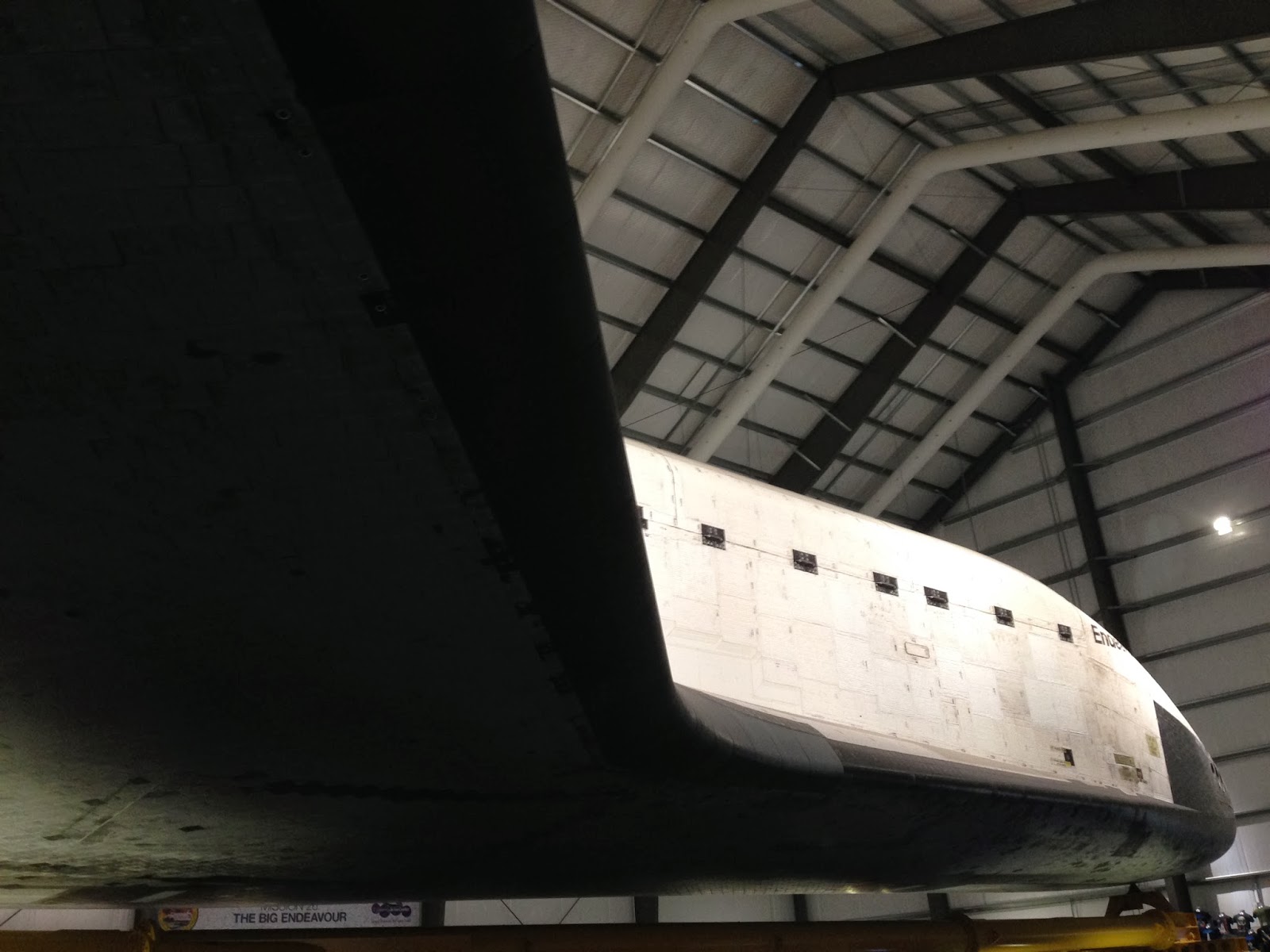 NASA is working on a new ship design. And of course, later this year, if all goes according to plan, Richard Branson will take a trip on his own aircraft into outer space. I hope a combination of privately funded research and NASA's own research will yield a future conducive to space exploration, living, and discovery.
Posted by Rebecca at 6:38 AM No comments:

The Rose Parade is one of those things you watch on TV, like the Macy's Thanksgiving Day Parade, that marks a certain day or time of year. It's one of those pageants you think you'll never witness for yourself, unless you happen to live in the area.

Well, this year I had the chance to see it for myself. The family and I traveled to the L.A. area, and on January 1st, we hopped on the first of several metro trains to make our way to Pasadena for the parade. There were a million people there to watch it in person. That's not a typo. One million. That's a quarter of the entire population of New Mexico, all of them present along a five mile corridor to watch this parade. Why do so many people turn out?

Because watching the parade on TV doesn't do it any justice. None. It doesn't even compare. When you're there, sitting just beyond that first, slightly-greater-than-ninety-degree turn, you get to watch the sun brighten the sky. You get to watch sky writers put out message after message. You get to look up at any point and see the Goodyear Blimp floating quietly overhead. You get to see people milling around on the street until the moment before the parade starts. You get to walk over a staging area where people in costume and horses and the bands' buses have gathered in the highway's median. You get to hear a couple of young women hawking the program. "You want 'em. We've got 'em." You get to smell coffee brewing. And then, the pace car and sound car come through. They pause. Fighter jets zoom over, leaving contrails in the sky. You wait. And then the first float comes around the bend, and it's a giant, futuristic car, towing a train, which is towing a giant TV camera, which is towing a giant screen showing the crowd. You get to feel the bands' drums vibrating in your chest, and hear the women behind you make catcalls at the bare-chested men leading the Hawaiian band (way to stay classy, ladies).

Everybody around us was happy. People ooh'ed and ahh'ed. People laughed. People danced and sang along with KC & The Sunshine Band. Yes, they were actually on one of the floats. Before it came around the bend, we heard that crowd yell and cheer, and then confetti came floating over to our side.

The parade is like a huge, post-midnight New Year's celebration. A lady in front of us wore a one-piece Chicago Bears PJ set with the words 'Bear Bum' on the rear flap, and a Bears hat, and a little New Year's fascinator hat on top of that. Others wore similar get-ups. But everybody wore a smile, and hope for the new year.

And then there's the part they never show on TV. The post parade, where people come through with their homemade signs and floats and costumes, mostly showing political ads like "We're felons" on a background that looks remarkably like Wells Fargo, or the guy holding a "Wake Up" sign upside down (he should've had some coffee). Looks like someone should have taken his own advice. Or the guys holding Jesus signs and wearing loudspeakers and proclaiming gloom and doom and how everybody is going to hell. One of them ended up at our line into the metro. Captive audience, and all that. After they passed, everybody climbed down from the bleachers and followed the parade route. There were bits of asparagus and rose petals on the ground. There are tons of people waiting to lead tours.

The parade lasts two hours, and yet it felt like it flew by. It is just that much fun. I will definitely go back one of these days.
Posted by Rebecca at 6:46 AM No comments: