During the summer, the Albuquerque Public Library runs a great program in which kids have the chance to watch a one-woman play, a magician, or a guy who calls himself Recycle Man, all of which is tied into their reading program.

Recycle Man is a guy who uses other people's trash to make musical instruments. I find it amazing that someone can take old pipes, empty plastic bottles and boxes, springs from a trampoline, hubcaps, and cans and create a song out of it all. I had an awesome video of Recycle Man playing "Low Rider," but Blogger is having issues. Anyhow, here's a robot he made out of cans: 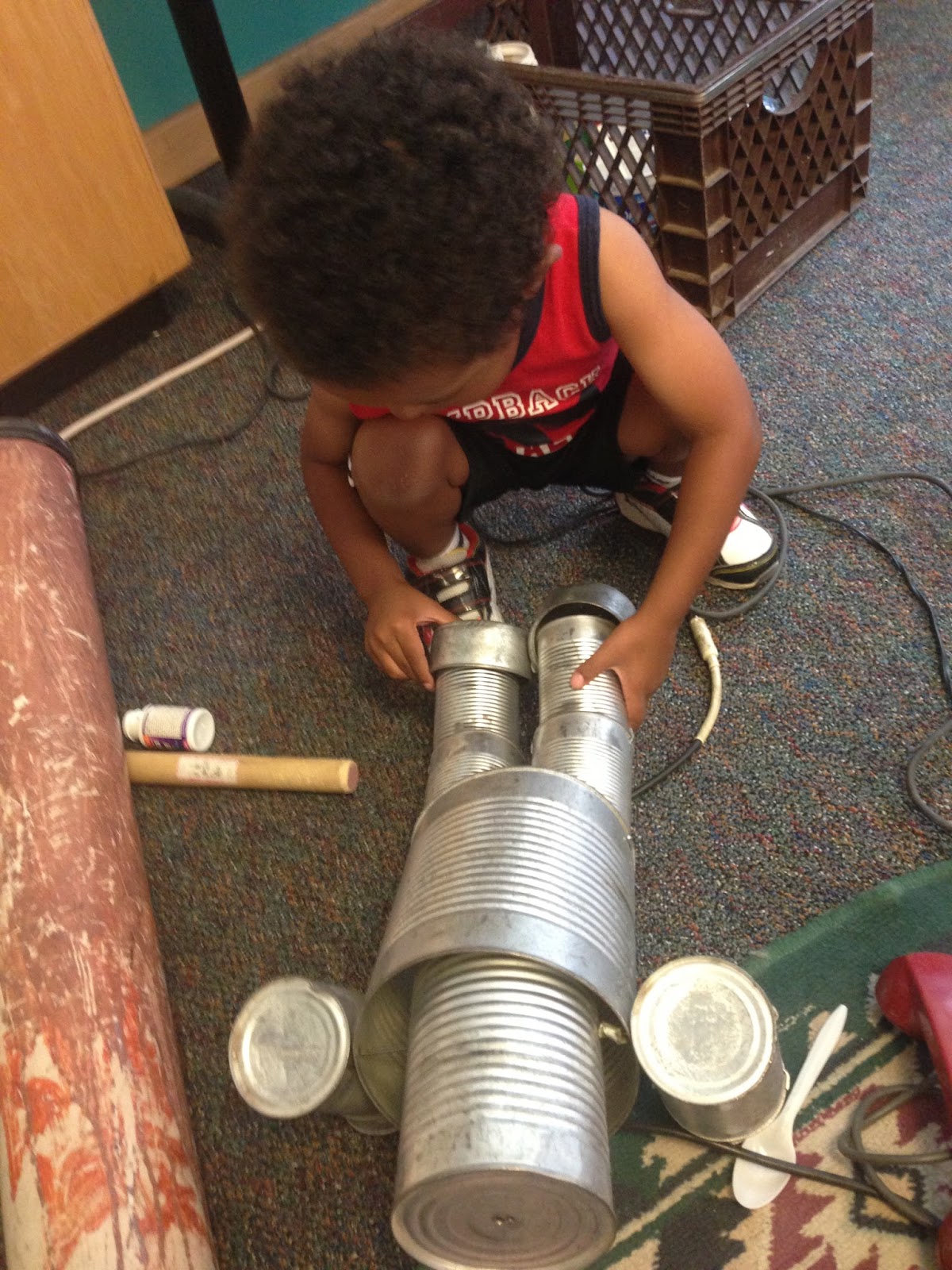 I think about the level of creativity it takes to put something like that together and then use it to make music, and it boggles the mind. How many people can do something like that? This might sound cheesy, but it takes being in tune with your inner child. My kid (in the photo, by the way), might use a box or a pencil or a rubber band in totally unexpected ways. I would have never imagined using an ordinary tool for something extraordinary. It's a reminder that creativity stems from somewhere childlike, which is probably why it makes people so happy to paint or sew costumes or make music or dance or do any of a number of creative things, because it sends you right back to being a kid.
Posted by Rebecca at 10:23 AM 4 comments:

Father's Day just passed, and so I've been contemplating some of my favorite fictional dads. As with fictional mothers, there are plenty of bad ones that come to mind. Hello, Darth. But I'd like to talk about a few of my favorite, nice fictional fathers.

1) At the top of the list is Atticus Finch from Harper Lee's To Kill A Mockingbird. This is one of my favorite novels of all time, and I adore Atticus. He is an easy-going lawyer with a rambunctious daughter. He stands up for what's right, even in the face of adversity. He is quietly righteous, and a good man. "You never really understand a person until you consider things form his point of view - until you climb into his skin and walk around in it." -- Atticus Finch

2) I adore Charles Ingalls of Little House on the Prairie by Laura Ingalls Wilder. "Pa" Ingalls is a hard working man, devoted to his family, honest, and a lover of music. He faces the hardships of living in the frontier with strength and gentleness. You get the impression that his children feel safe with him around.

3) And finally, Dr. Alex Murry is a physicist as well as a father. I love the family dynamics in A Wrinkle in Time by Madeleine L'Engle, and Dr. Alex Murry is one of the reasons why. I can't begin to imagine his terror when he realizes his children have come to free him from IT. He's an intelligent man, and part of the glue that holds his family together.

And there you have some of my favorite fictional dads.
Posted by Rebecca at 7:23 AM No comments:

This week I find myself working steadily, nose to the grindstone, and so I haven't come up with a decent post for the week. Such is life when you have a job, a young child, writing, and super awesome stories to read so you can vote for the Hugo Awards. Instead, I'd like to share a few links with you.

I have a guest post over on The Howling Turtle in which I reveal the sources of the stories that can be found in my short story collection The King of Ash and Bones, and Other Stories.

Here's an article by Django Wexler on the history of female warriors. This is a meaty article on the reality of women in combat.

Writing a police procedural? Here are 7 things your protagonist should not do.

And finally, if you're a writer and feeling a little down in the dumps about your writing, here's an inspirational post from Jodi Meadows to help pick you up.
Posted by Rebecca at 7:06 AM No comments:

This week my husband and I will be celebrating our twelfth wedding anniversary, so to celebrate on the blog, I thought I'd share some of my favorite fictional couples.

And a lovely quote from the book: “But just as he knew the sun was obliged to rise each morning in the east, no matter how much a western arisal might have pleased it, so he knew that Buttercup was obliged to spend her love on him. Gold was inviting, and so was royalty, but they could not match the fever in his heart, and sooner or later she would have to catch it. She had less choice than the sun.”

The book has some great lines. Many made it into the movie, but not all.
Who are your favorite fictional couples?
Posted by Rebecca at 6:25 AM 2 comments: